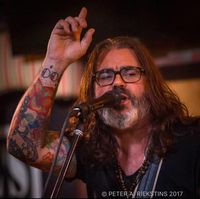 You may not think of New York's Hudson River Valley as the home of a boundless music scene, but you’d be surprised at the number of heavy hitting musicians who call it home. One of those being singer/songwriter/guitarist Pat O’Shea. The former sideman continues to impress with his well crafted songs, strong musicianship and a band that will make you take notice. His resume is equally impressive and includes six years playing guitar for the legendary Levon Helm, countless shows backing Blues greats James Cotton and Hubert Sumlin, as well as collaborations with Jimmy Vivino (Conan O’Brien, The Fab Faux), David Johansen (The New York Dolls) and Larry Campbell (Bob Dylan) among others. O’Shea’s songs are pure American music, influenced equally by heartland Country, down home Blues and straight ahead Rock n Roll.